Tuesday morning, up very early, much earlier than we have been used to… not sure if this is a healthy thing or not. We’ve spent the past 2 days or more packing up our accumulated belongings and cleaning our little cottage ready to move up to our next cottage, much further north in France.

This process made us realise just how much “stuff” we have accumulated in only 3 months, quite surprising really. Rod kept assuring me that everything would fit in the car despite my doubts, but he only just proved himself right there. Our poor little silver beast was completely weighed down, to the point we almost couldn’t see out of the rear-vision mirror. But that’s ok, we had two more mirrors. So off we set. 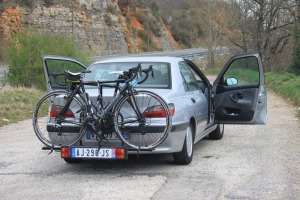 Loaded up and ready to go.

It was an unusually overcast day, something we weren’t used to at all from our days in the Languedoc Roussillon region, and as we drove, the more grey and drizzly it became. Never mind, we do know spring (and summer) are on their way eventually. After leaving our area and heading north, we soon discovered there is a big difference between the relatively flat coastal plain and the mountains and cliffs of the “massif central” region.  This part of France is made up of many ancient volacanoes, and the shallow valleys and plateaus in between, some of which were formed by various mountains and hillsides collapsing in the valleys below. We decided to visit one such area, which is the origin of the famous Roquefort cheeses. Detouring from the motorway, we headed into the hills & found the town that sits above the famous caves where the cheese is made and went into one cheese cave for a tour. 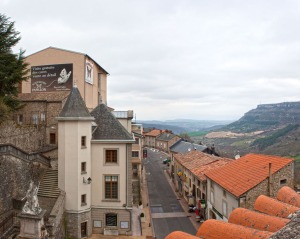 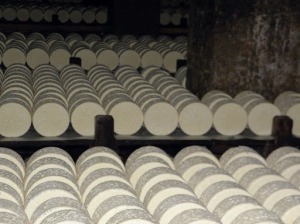 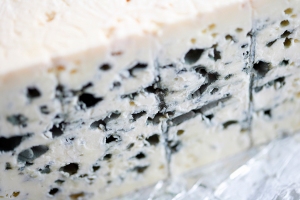 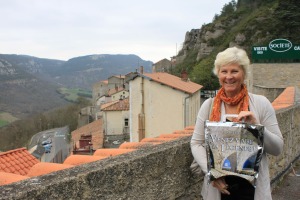 I had read (on Tripadvisor) a review from a british resident who said the cheese tour was rushed, was not in English, and was really only for the lovers of very smelly cheeses. That poor guy was clearly delusional, because our tour (completely conducted in French) was quite interesting, informative, not rushed (considering there were only four of us in that particular group) and the smells through the caves along the way were quite delicious. I was holding up the rear of the group as we rounded one set of stairs, opened a door and headed down more stairs into the “classic” cave… and as I uttered a deep appreciative “Mmmmmmm…” at the bouquet, our tour guide laughed from all the way up the front and said “Yes, smell the difference!!” Now I know she was speaking entirely in French, but somehow I instinctively understood exactly what she said. Some things are very easy to interpret!  We stocked up on a variety of cheeses and then it was back to the motorway to continue our journey north.

As you can imagine, driving through a mountainous region we had to go up and down a lot of hills and while they didn’t seem overly imposing at the time, they were actually bigger than the biggest mountain in WA so at times our poor little silver beast struggled with the new & unexpected. However, she pulled through and we made it to our overnight stop in Clermont Ferand. This was literally just an overnight stop to break the journey and in the morning we were on our way again. The next stage saw us leaving the higher ground and dropping to a much more level landscape, but the grey drizzle continued for the rest of the morning.

It was obviously much greener the further north we travelled, but we were quite happy to see that the trees were still in bloom and leaves were springing out everywhere on the trees so  it definitely won’t be long before we feel some warmer weather. That was one thing that we had noticed during our last week in the St Chinian area – the trees all began to transform themselves from bleak bare stick figures into fine delicate patterns of the palest green lace. It was almost as if they had a secret cue and had been holding themselves back until just that week. It was lovely.

Wednesday had us comfortably cruising along through gentle rolling hills and flat lands until we arrived at our quaint new cottage, which is actually part of a small farm holding in a very rural setting. There are three buildings on our site, well actually four if you count the old stone barns that are screaming out for a renovator to come along & turn them into another gorgeous dwelling. But until that happens, we have our little cottage (or “gite” in French  – pronounced “jheet”), which is actually attached to “the big house”, and the “little house” which us slightly uphill & off to the side of our building. Our landlords, Jim & Amy, currently live in the little house as they have rented the big house out to an English couple (arriving at the end of the month) and the gite to us J. 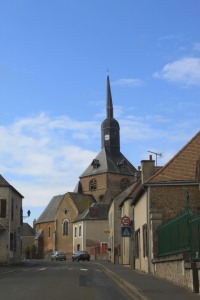 We also share the grounds with Amy & Jim’s various pets: two horses, three cats, three ducks and a selection of chooks. Oh and not forgetting the magnificent looking rooster who, thankfully, does not wake us up at the crack of dawn. I don’t know quite what they’ve done there, but we hear him wandering around the yard crowing all day long (well, mostly around midday) so whatever it is, they have obviously trained him well. There’s also a beehive in the tree up the back, but we haven’t tried to befriend them. 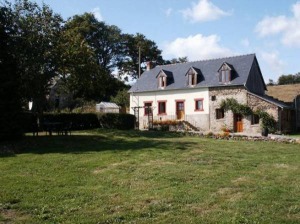 Our give for the next 5 months. Well the stone section on the right.

We did try to befriend the horses, well I did (Paige) but not very successfully really. The problem was that I had been warned about the electric fence – which was just to stop them pushing their way through the tape-fences and eventually escaping. The only part that is actually electrified is the top tape, which (being a bit short) happens to be at my shoulder height. Well the first time I went up to see the horses, they quickly came over to say hello and to investigate whether I brought any goodies for them. Unfortunately, as I was patting one, I forgot about the electric tape and my arm brushed against it, giving all three of us an unexpected shock! Well my arm tingled for a while, but it didn’t last as long as the suspicion that the poor horses regarded me with for the rest of the day. I tried visiting them about an hour later, but the poor things stopped in their tracks and stared at me, obviously remembering that I was the bringer of back vibes. Perhaps by the time I return from Australia in five weeks they will have forgotten. How long is a horse’s memory? 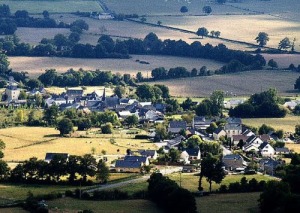 The area we are situated in is a beef farming area  with many small villages and hamlets, along with a few larger towns within easy reach.  I actually had the pleasure of tasting some of this beef in a wonderful restaurant we found in Evron, one of the larger towns about 10km from us. We shared our last lunch together before my detour back to Oz, and it was so good that we will definitely return for de journer and diner there. And we will bring our visitors (Chris, Murray, Mum, Dad, you are all in for a treat!).

So, after three days of settling in and the beginnings of our exploration of the environs, I set off for my Australian “holiday” to meet our new grandson Logan, while Rod dropped me off at Charles de Gaule then headed back to map out all the best cycling routes for us. I also look forward to his next entry, all about cycling amongst the cows!