Last week we headed off for a week in Provence. Seeing that it was about as close to us as a trip to Margaret River is from Perth, it was a good opportunity to do so from Saint Chinian. We booked a couple of B&B’s in Avignon and Nice, packed the Peugeot, checked the oil and tyres and headed off up the A9 towards Avignon.

Our first stop was Pont du Gard, an ancient Roman aqueduct built over 2000 years ago. It carried water to Nimes. The Romans knew how to build things to last.

We had a quick bite to eat from the tourist cafe. Same the world over, expensive and rubbish. Next stop was Chateauneuf du Pape, just a bit north of Avignon. Chateauneuf du Pape was established as a wine growing region for the Avignon popes. It is one of the more renowned wine areas in the south of France.

We got there when Le Mistral was blowing at full strength. Le Mistral is the winter version of the Fremantle Doctor. It is a very cold and strong wind that blows down the Rhone valley. It was absolutely howling and freezing. We attempted to climb to the castle ruins on top of a high hill above the town. We nearly were blown clean off the hill. Deciding it would be more fun back down in the town, we went in search of an open cellar to sample some local wines. While there are dozens of cellars in town, very few were open. We found one, sampled a few wines, bought a couple of bottles and headed off to Avignon.

The castle above Chateauneuf du Pape

We arrived in Avignon at about 6pm after a rather horrendous attempt at navigating through narrow streets, pedestrian areas and one way roads with a very out of date GPS. Eventually we located a carpark near our B&B (La Petite Saunerie), collected our stuff and headed off to the B&B.

Our B&B was located right in the centre of the historical walled town. Perfectly located. Our hosts were a young french couple with a 2 year old son, who spoke far better french than us. It was a bit defeating knowing a 2 year old had far better grasp of the language than us. The B&B was a recently restored townhouse, very comfortable and warm.

Our room in the B&B

Our hosts gave us a few tips on where to eat in town. We headed off to seek out one of her recommendations, l’Orangerie. A small bistro not far away. We were the only ones there when we arrived, and remained the only customers for the night. Probaby to be expected as it was a cold Monday night and that wind had been blowing all day. Despite that, it was a pleasant meal. Nothing to get excited about, but pleasant enough.

The next day Le Mistral decided not to blow & was a lovely brisk morning so we headed of to the Palais des Papes. This was the hangout for about 9 popes who weren’t welcome in Rome in the 1300’s. They built a huge palace and did their pontificating there for almost 100 years. We ended up spending over 3 hours walking through the palais. Quite an amazing place. Those popes knew how to have a good time. We were reading a description of the amount of food they put on for the public ceremonial feast after one particular pope was appointed. Wow… I can’t remember the entire list of food, but the very last line stuck in my mind…. “and more than 95000 loaves of bread”.   After the palais we headed off to the Pont d’Avignon, a bridge (or rather the remains of a bridge) built over the Rhone River. It was there that we learned the name Avignon apparently comes from an ancient word meaning wild & windy place. Of course, but thankfully our day was beautiful. 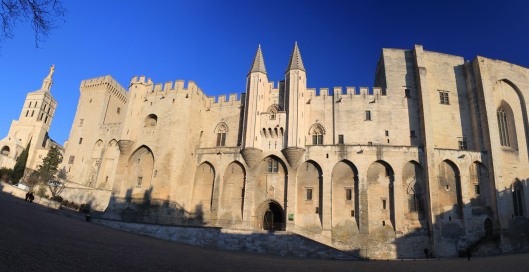 The next day we headed out to the Provence country side. We had a route lined up but didn’t really have intentions to visit all the places lined up. Good thing, as we only managed to get to a couple of the places we pencilled in to see. First stop was St Remy de Provence, a town just south of Avignon. We were in luck because it was market day, a huge market was set up in the middle of town. We strolled around the market for a while, bought some vanilla pods and pistachio nougat. After St Remy we headed towards the village of Le Baux de Provence, but only got about 2km up the road when we came across the impressive old Roman & pre-Roman ruins of Glanum which date back to 600 BC. We spent about an hour there, wandering through the ruins.

Next stop was the town of Le Baux de Provence, a fortified town built high on a hill top. Very high, on a very steep & narrow rock of a hilltop. Like some of the other villages near us, Le Baux is officially recognised as one of the prettiest villages in France. The village sits just below the old fort ruins, which was the feudal home of the Grimaldis. the 360 degree views from the fort ruins at the top were sensational. 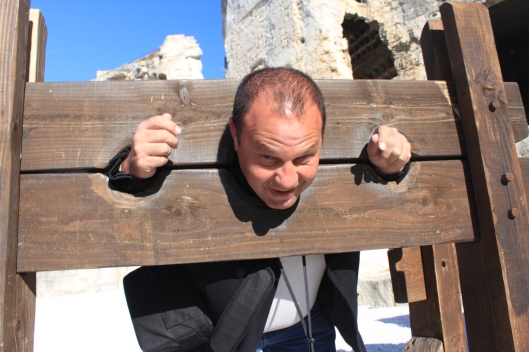 He has been a very naughty boy.

How to send you kids home quickly and cheaply.

By now it was getting late, and like the rest of France, on a Tuesday in winter, not a lot is open. We decided to head back to Avignon and seek out a cozy restaurant for dinner.

We were going to try one of the restaurants recommended by our B&B hosts, but when we got there we decided the menu wasn’t overly appealing and there was nobody inside.  Next door was a restaurant called “Why Not“. It had a few people in it and the menu look quite good. In the end it turned out to be the best restaurant we have been to, so far in France. The food was delicious, generous and service was excellent. By the end of our meal, the restaurant was packed. A testimony to its value, food and service. A packed restaurant this time of the year in France is a rare sight. Our meal was finished off with a complimentary huge cocktail glass of sour jelly lollies. The french love these.

Next day we were off to Nice for the second part of our week in Provence. Part II

Error: Twitter did not respond. Please wait a few minutes and refresh this page.