This week we departed on our own Tour de France. We cycled from Saint Georges-sur-Erve to Paris, a total of 273km over 4 days. We stayed in chambre d’hôtes (B&B’s) along the way for 3 nights. We arrived in Paris, the day before Bastille Day and will depart Paris the day after the real Tour de France hits town.

Day 1 of our tour took us from Saint Georges to Belleme and was by far the toughest leg of our tour. Leaving Saint Georges we were faced with several climbs up and over 250m hills before hitting a flat section for about 30 km.

Our last 15km into Belleme involved more hills at around 250m. it seemed that we were just going up then down and back up again. By the time we got to Belleme, we were exhausted. Fortunately, our chamber d’hôte (Hotel d’Suhard) was not only warm and inviting, but it was also extremely beautiful, old, very French, and our hosts had paid attention to every little detail. Perfect. Paige didn’t want to leave.

We did not have lunch on Day 1. We had planned to get something along the way, but typically, like our past experiences, France shuts down between 1-3pm, making it difficult to get some lunch, so coffee and snickers bars would have to suffice. At least we had room for the pizzas we demolished in the evening.

Day 2 saw us leaving Belleme for Courville-sur Eure. This route had a few large hills to climb initially, with a larger 234m climb in the middle. The last 30km was all down hill.

We arrived at Domain du Tronchay, a working apple orchard. We had booked dinner with our hosts Edith and Francois as we were a bit out of town. That proved to be a real bonus, as dinner was a full-on French gourmet experience with our hosts. It gave us a great opportunity to converse in French as Edith and Francois did not speak much English. However that did not pose a problem and we were able to understand each other very well. The food was sensational and with many bottles of wine, calvados, hazelnut liquer in our bellies, we headed off for a good nights sleep.

Day 3 was an easy ride, basically flat the whole length. We got to our hotel around 4pm. This time there was no luxury as we opted for a basic motel. Nonetheless, it was comfortable for two very tired cyclists. Our motel was about 3km out of Rambouillet, so we caught a bus into the town centre for dinner. We had a few drinks in a bar before stumbling across a very nice restaurant that served lamb shanks. We had been hanging out for lamb shanks for awhile. These were no disappointment and nor was the rest of the meal. Le Cheval Rouge in Rambouillet is definitely a recommendation.  We caught the bus back to the motel and crashed.

With sore legs and backsides we started on our last day. This leg sounded easy, reasonably flat for the first 25km then cycleways all the way into Paris. Ha! The flat part proved easy enough, but the cycleways were another thing. Up and down, stopping and starting, dodging dogs, children and pedestrians. It proved to be quite difficult and by the time we had hit central Paris we were ready to call it quits. We eventually managed to make our way to our apartment, but had an hour wait until we are met by the apartment rep. We decided to head off for a few well earned drinks at a bar around the corner.

We had booked an apartment very close to the Eiffel Tower. Very close indeed. We have 10 days in Paris, but the first day will be spent recuperating we think. We have the fireworks for La Fete National (Bastile Day), so I think we will be sitting on our balcony for the evening with a bottle or two of champagne.

All up, we did 274km and spent 14 hours on the saddle. Not sure if we want to repeat that effort over 4 days again! Well we may, but we will be better prepared for it. The crap European weather has not allowed us much opportunity for riding.

One of the attractions of France to us was the opportunity to cycle around the magnificent countryside and villages. Similarly it was also an opportunity to see the Tour de France close up and participate in the roadside festivities that we have seen on the TV and dreamt about over the years. As a bonus, the first Aussie cycling team in the Tour de France (Orica GreenEdge) was making its Tour debut, along with Cadel Evans, defending his title.

We had planned to see some of the tour while in France, so when the route was announced, we booked a hotel room in Rouen. The closest stage to where we were, were stages 4 & 5, arriving and departing from the Rouen in Haute Normandie. This was a bonus as, Rouen was only one of two towns on the whole tour that was hosting a finish, and a start, of a stage. So we would get to see two stages. We will also be in Paris for the last day of the tour.

Armed with our Aussie flags, we drove up to Rouen in the morning. The tour wasn’t due to arrive into town until 5:30pm. We checked into our hotel on the outskirts of town around 1pm and took the bus into centre ville. The reception at the hotel said we were lucky to get a room as there were no other rooms available in the town (and Rouen is not a small town). Indeed, when we booked, on the same day the tour was announced, there were only a handful of rooms available. We met many people during our stay who said they were staying in Paris overnight and catching the 1.5hr train back to Rouen the next day for stage 5.

We checked out a vantage point, on a bridge over the Seine River, about 1km from the finish. As we had about 4 hours to kill, we decided to head to a small bar we could see nearby. We met an Aussie and Kiwi couple in the bar, had a yarn to them, and then noticed others listening in, more Aussies! The place was crawling with them. Around 4pm we headed back to our vantage point, which was now taken by a crowd. We managed to find a spot nearby and settled in to watch the tour caravan. A 20km long cavalcade of sponsor floats and displays. The cavalcade is a regular on the tour and precedes the riders by about 30 minutes. Heaps of promotional crap is thrown out to the crowd along the way. We ended up with several key rings, lollie bags, caps, vouchers, water bottles and other useless junk. All good fun. paige was wearing her Aussie cycling jersey. It soon became obvious that she was a target for the sponsors to throw their junk at. Australians seem to be very popular in France, with several of the sponsor floats chanting (cringe) “aussie, aussie, aussie” as they spotted Paige, hurling heaps of stuff at her. However, there were plenty of other Aussies around judging by the number of flags around. One aussie couple spotted us and decide to hang around with us for the rest of the day. 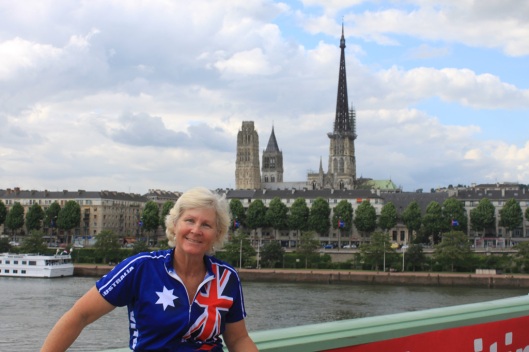 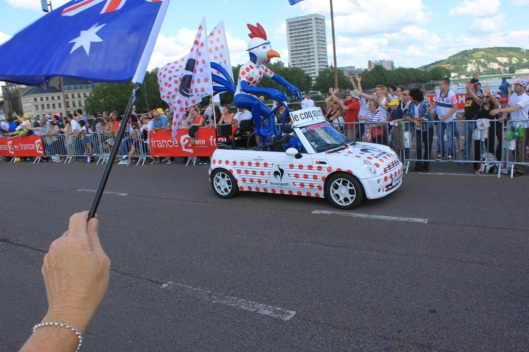 After the finish, we strolled up to the finish line, along with about 20,000 other people. Deciding it was too much, we headed off to find a bar in a quieter part of town across the river. We found a nice bar and settled down to a couple of drinks. We met a charming American named Joe, who was following some of the Tour. We chatted about the similarities and differences of life in Australia and the US for a while. Very pleasant evening. We decided to head off for some dinner, following some drunk Norwegians. They looked like they want to party, but the town was fairly dead. I think they were in the wrong part of town for that.

The next morning, we checked out of the hotel and headed back into town to watch the departure of stage 5. We found a good spot in the town centre that offered a good position for taking some photos. There was only one other person near us. Guess what? Another aussie!

Same deal as the previous day, the caravan came through the town first, followed by the riders. The departures are always a bit more sedate than the finishes, and none of the riders appeared to be in a hurry, so we had plenty of opportunity to get some good photos.

It was all over very quickly, so we headed off to find somewhere for lunch. We came across a little bistro in the historical centre of tow. They had a two course meal with, cafe and a glass of wine for 12 euro ($15). Can’t beat that!

After lunch we headed back home, looking forward to the finale in Paris. The Tour de France is apparently the third most watched sporting event in the world, after soccer World Cup and the Olympic. It certainly was a wonderful experience to see close up, and I’m sure it will not be our last.