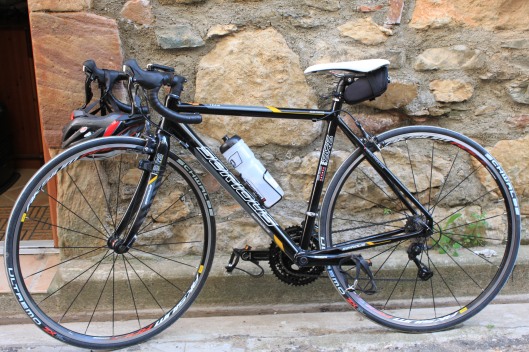 Just got back from a nice 36km ride through the hills around Roquebrun & Cessenon sur Orb. What a magnificent day for a ride – the trees are blossoming, the birds are singing, butterflies are out and its oh so sunny and warm.

I do have to say I miss my Avanti back home in Perth. Its good to know it’s there waiting for me. 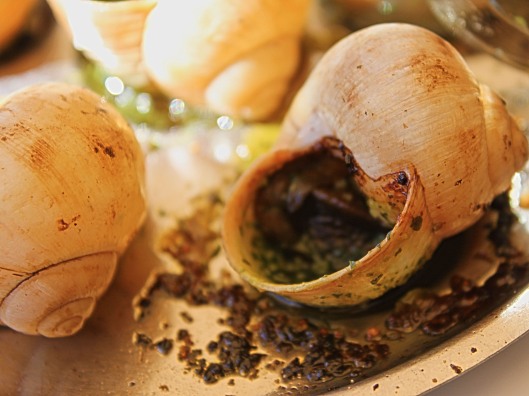 “Dans quelle ville est-ce?”  or at least that’s what I think he said.

Ahh, the lightbulb went on. “Narbonne” I replied.

6am Tuesday morning, platform D at Narbonne train station, about to board the train headed for Barcelona. This was the start of our 3-day trip to discover the delights of the Spanish city. The train was already en route from Avignon, so we were faced with sleepy passengers asking us which town we were in (yes I know… us??). Well I supposed we might have looked French in the dark.

We had set our alarms early and driven here to park the car for 3 days and start our journey. The train was ok, not one of the best we have caught in France but it was a short train which meant no first class carriages. However, it was non-stop to the Spanish border and it turned out to be better than the next stage. We changed in Portbou to one that was more like a suburban train (but with a toilet) which stopped at every single town along the way. All in all a bit long & boring but we got there with the help of books, ipad games and a bit of sleep.

Barcelona is quite a modern city with big, wide, regular streets for the most part. Of course, when you get to the “old city centre” it’s a different story and more like what we have become used to – narrow winding pedestrian streets with lovely old buildings.  We dropped our bags at the hotel around midday and with the help of a city map we headed out to see what we could see.

First stop was the Placa Catalunya, or the main city square. Lots of people, and pigeons, were out enjoying the sunshine, eating lunch in the park & enjoying the fountains, statues & flowers. We walked from there along La Ramblas until our stomachs could not growl any louder and we succumbed to the touting from a pizza/paella restaurant for lunch. This area is all very touristy for a good reason – its seething with tourists from all over the world. We sat at the window table upstairs & people-watched while enjoying lunch. We couldn’t understand why so many people were stopping & taking photographs just underneath us so of course we had to see what the fuss was about. It was this fountain, so we did the same. 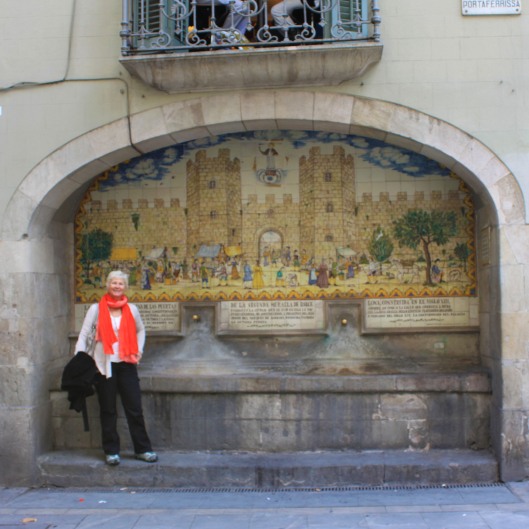 We had lunch in the window above this mosaic fountain

Continuing along La Ramblas, we stopped for coffee in the sun and were entertained by a “mobile market”.  A busker had just finished in the square in front of us when along came about 6 or 8 men carrying large cloth sacks tied by long strings. Suddenly the sacks were on the ground being unfolded and voila, we had an instant street market in front of us. Handbags and sunglasses seemed to be the main fare and a few tourists soon got drawn in.  We got the feeling someone was watching out for the local police on the beat as, all at once, the strings were pulled, cloths bags magically closed up & the market men moved on.  At the end of La Ramblas are the port & beaches and the Columbus monument. 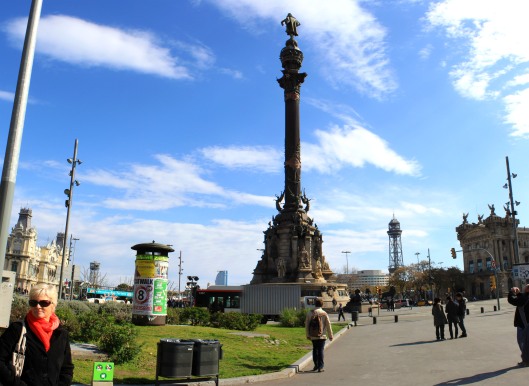 Making our way back up La Ramblas we stumbled across the old city market, La Boqueria.  We both love finding a good market in France and this one in Barcelona was terrific. So many stalls with colourful, fresh-looking produce, little bars dotted around inside and then the prices!! Ooh la la, what an eye-opener after Australia, both in prices and the selection of produce available. My mouth was already watering over the big containers of huge, bright strawberries for around 2 Euro.

Seafood at the markets 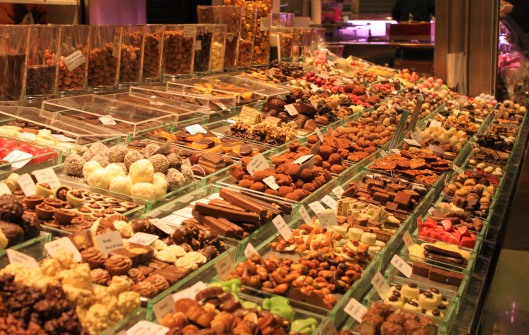 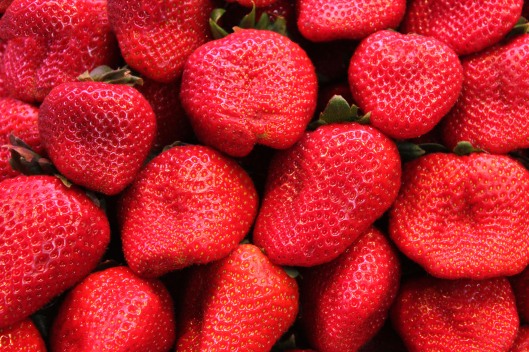 That night we ate in a lovely restaurant a few streets away from the hotel, Imprevist, which we both highly recommend. Lovely meal, great service and local wine knowledge from our waiter, and even though it was a quiet night the atmosphere was good. 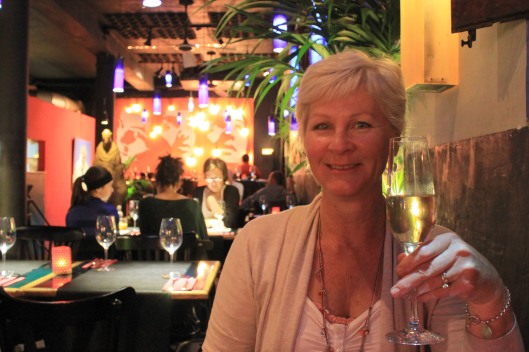 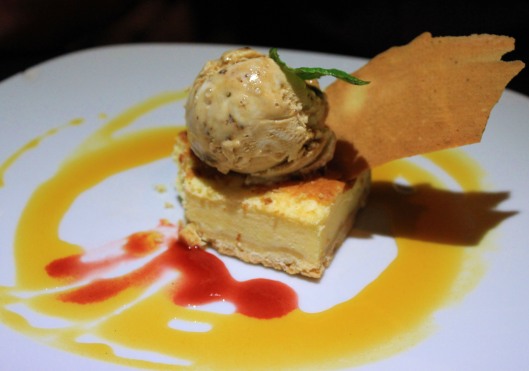 We had taken advantage of the free (but patchy and slow) wifi in our hotel to book a tour for the next morning. We discovered a Segway tour operator in Barcelona on TripAdvisor. Segways are two wheeled people movers that you stand on and lean forward to move forward and lean backwards to move in reverse. They look as if they would be a bit unstable, but have an uncanny ability to correct their vertical position regardless of whether you are falling forward or backwards. And they are great fun!!

Our tour guide was Edgar, a young Barcelona local. As we were the only two in the tour for the day, we had Edgar all to ourselves. Edgar gave us a run down on how to drive  the segway and then a brief history of Barcelona, before we headed off to do battle with the Spanish traffic. We actually stuck to the footpaths, cycleways and small pedestrian alleys, so we were not in any real danger being rendered “la plancha” on the roadway. It was a great way to get around and see a lot, especially with sore feet. It was also another beautiful sunny day, just a pity that the breeze kept the temperature a little cool.  The beaches were lovely even though they are man-made.  We were also able to educate Edgar on a little Australian culture in return. After he pointed out the old men playing dominoes and mentioned they played there all year around, even wearing their speedos in summer, well we couldn’t resist informing him about the real name for speedos back home – the good old budgie-smugglers! He thought that was hilarious. 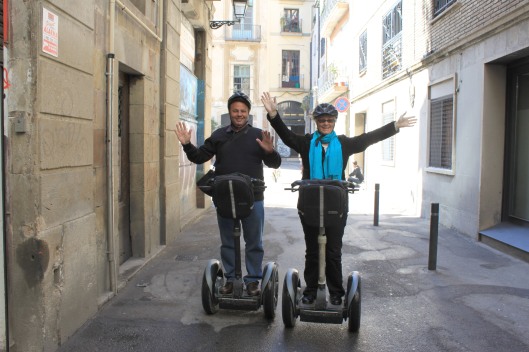 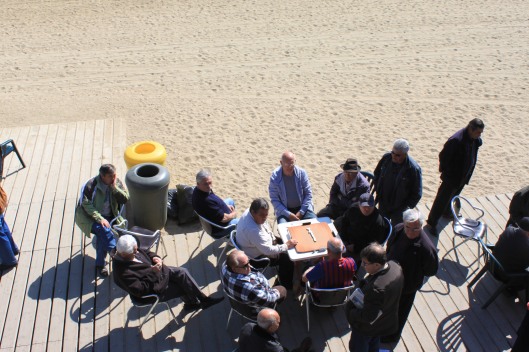 Playing dominos at the beach. They'll be wearing budgie-smugglers in summer!

Edgar directed us to set of ancient Roman columns that are inside someone’s house. The owner wanted to move the columns to his country holiday house, but the spanish authorities weren’t too impressed with that idea. 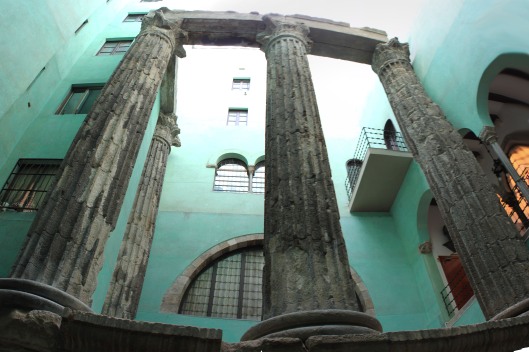 Ancient Roman columns inside a house.

Edgar showed us his favourite tapas bar, El Vaso de Ora located in Barceloneta near the seafront. We decided to visit the bar that evening. We were not disappointed. It is a long narrow bar, with few tables. Most customers sit at the bar. When we arrived it was almost a full house. Edgar wasn’t wrong about it being a favourite for the locals, but there was just enough space left at the bar for two people. We quickly snapped up those spots and ordered our first tapas. El vaso de Ora also brews its own beer, and a very nice drop at that. The tapas were superb, very delicious and well prepared. Even though we were obviously the only tourists in the place, the service was good and the waiters quite patient with our lack of Catalonian language skills. We ordered about half a dozen plates, including our favourite, pan fried foie gras with caramelised onions. Even Paige loved it, and she hates all things liver. We rolled out of the tapas bar about 90 minutes later feeling very full. 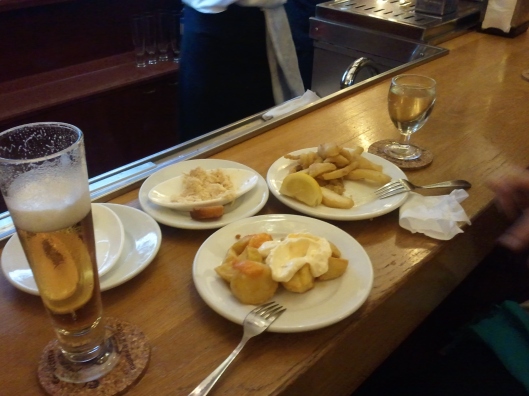 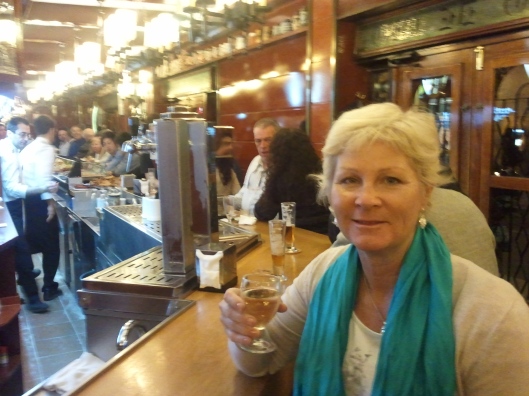 On the way back to our hotel we passed a very noisy Irish pub. We decided to see what all the noise was about. Inside were some big screens showing FC Barcelona vs Bayer Leverkusen (from Germany). FC Barcelona were whipping than 7-1. It seemed like a good place to be so we headed inside. We tried our very best to order in Spanish, but soon realised English was the word. As well as being a place to watch the football, it was also a place for the local gay irish community to hang out. We met a very drunk Noel from Ireland and his friends. He said we could stay at his place next week when we return to Barcelona. Somehow, i don’t think he will even remember where he was last night. But he did give us his email address… I wonder if we should give him a rude shock, haha!

The next day was our last full day in Barcelona. We wandered around a few back streets, seeking out a churros cafe that Edgar had recommended. Unfortunately it was closed, but we did manage to find another place nearby that served up a very thick chocolate drink with churros. There were a lot of very drunk, loud and sorry Germans around town. We took a few snaps of the surrounds before settling at a bar on the waterfront and enjoyed a sangria or three. 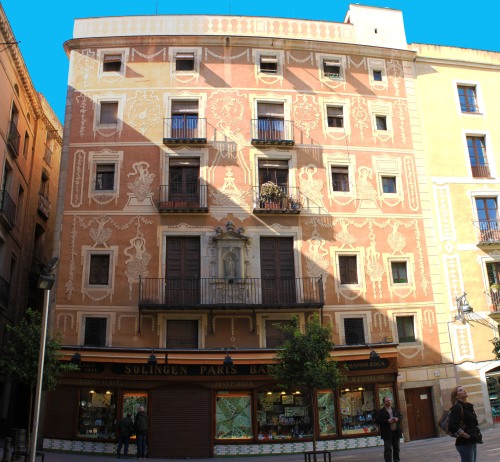 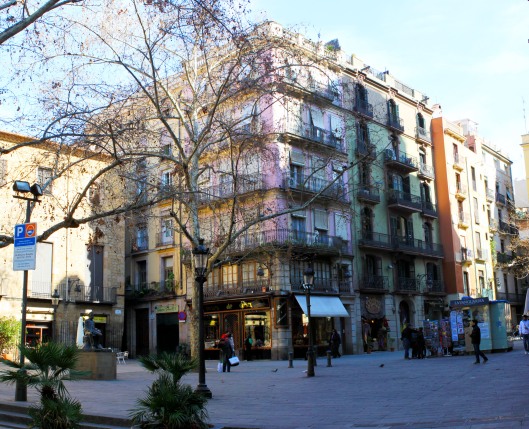 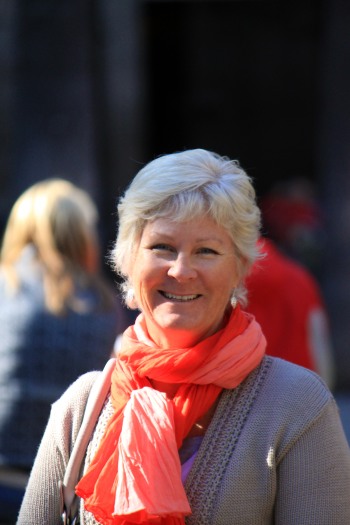 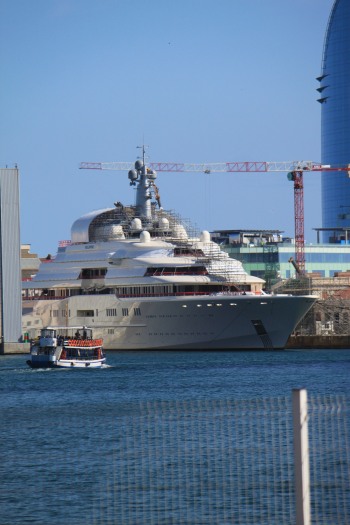 This yacht owned by some Russian billionaire is supposed to be th largest private yacht in the world. It is in Barcelona getting a refit (already!). We had to be up very early on the last day to catch our 6.16am train so we decided to simply walk around the block from the hotel & choose a restaurant.

We made a very fortunate choice when we were drawn in by Vinilo’s menu board on the footpath and found ourselves enjoying one of the most delicious degustation meals we’ve ever had.  The waitress was so friendly that we were made to feel perfectly at home. She even suggested that, as there was a choice between the meat dishes (pork or duck) we should order one each so that we could taste both. As we had struggled a bit to interpret some of the dishes on the board outside, we sat back prepared to be surprised. Not only were we surprised, but we were absolutely delighted and each of the six courses had us oohing and aaahing and mmmmmm-ing  throughout the evening.  A decent bottle of red wine was also included in the (extremely reasonable) price. The two highlights were a goat cheese & truffle terrine drizzled with a honey & oil sauce that was melt-in-the-mouth light and so delicious, and the signature dish of the house, a duck “burger” made from combined duck breast and foie gras with an irresistible sauce. The roast pork, the local pan fried fish and the lightly seared tuna dishes were also very very good. Not to mention the starter and the desert. So much for my vow earlier in the afternoon to start eating more like the Europeans and have much smaller meals! 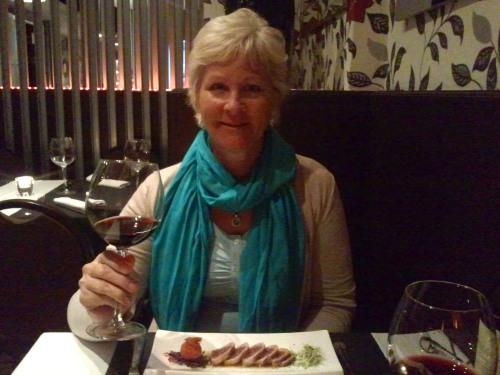 On the last morning we were up & out of the hotel by 5.30, at the train station with plenty of time to take advantage of the decent wifi on offer with a coffee from MacDonalds (ok ok, but it was only a coffee and ONLY so I could catch up with news from home via a decent connection) and we were then on our way back home to St Chinian.

We loved Barcelona, a very vibrant and friendly city and we are looking forward to being back there for one night next week as we depart on the next adventure, our Mediterranean cruise.